Today you’re getting a crash course in the mezcla maravillosa de (wonderful mix of) English and Spanish that’s mainly spoken by the millions and millions of Latinos living in the United States… and that you might also know from popular reguetón songs.

In short, if you don’t know any Spanglish, you’re running behind, bróder. Time to fix that! In this article, I’ll teach you 10 funny Spanglish phrases and words you’ll inevitably hear in Spanish-speaking communities in the US, and that you can use yourself to impress your Latino friends!

Used when suggesting someone to calm down or what you probably figured: to take it easy. The Spanish sentence would be: Tómalo con calma (Take it easy).

“Janguear” comes from “hanging out”, so you can use this one when inviting your friends to go out or in Spanish, vamos a salir (let’s hang out).

PERSON 1
Estoy aburridísimo, bro. Ya es el weekend y no tengo nada que hacer.
(I’m so bored, dude. It’s the weekend already and I have nothing to do.)

Pretty obvious combination… The Spanish expression would be ¿Estás listo?

The English word “look” as in “appearance” has become very popular in different languages, so it almost has its own meaning in Spanish.

So, when you say ¿Te cambiaste el look? to your Latino friend who used to be blonde and now is a brunette, the Spanish equivalent would be ¿Cambiaste de apariencia? (Did you change your look?)

Another mixture thanks to the internet…. The Spanish sentence would be “mandar un mensaje al buzón de entrada” (to send a message to an inbox), but I guess “inbox” is much shorter.

PERSON 2
Bueno, le voy a mandar un inbox a ver si se anima.
(Alright, I’ll send her an inbox to see if she wants to come.)

By the way, if you don’t only want to work on your Spanglish, but also 100% Spanish, why don’t you grab our Essential Spanish Chunking Kit? It contains a cheat sheet with the most important Spanish chunks we teach in our videos and that you’ll need in every Spanish conversation!

Chequea el link and… whoops! (Another Spanglish phrase right there.) The Spanish phrase would be revisa el vínculo, but let that one slide, okay?

So, Spanglish is not only about mixing words in both Spanish and English, it’s also “Spanishizing” words in English and vice versa.

Since this is a process bound to culture and to how people talk on the streets, no hay reglas (there are no rules). The results are both very interesting and often hilarious! Wait until you get to number 3, you’re gonna break de la risa (of laughing), bro.

This mutant word comes from the English word “insurance” and the Spanish word “seguro”. I’ve heard a lot of Latino friends from the United States use this one often when talking about el seguro de su auto (their car insurance).

There’s something about how this word sounds that just makes it funny, but there’s nothing funny about nutrition kids!

It means almuerzo and it comes from the English word “lunch”.

And yes, Spanglish is a thing in Latin America too, so much so that we use the word “brother” to refer to friends, but we give it a Spanish touch and it sounds like Bróder.
Remember I told you were going to laugh? Well, check this out: I’ve even heard brodercito (little brother) as a way to refer to really close friends… AND BRODERCITA (lit., little female brother) TO REFER TO FEMALE FRIENDS! Can you believe that?

As the internet became a worldwide necessity, a lot of words in English became part of Spanish language as well. And instead of saying Buscar en google (search using Google), we started saying googlear (to google), since it was easier, as in: Tengo que googlearlo (I have to google that).

This one is hard to explain, since aplicar is actually a word in Spanish that means to “apply something”, such as paint, or to adhere a substance to another:

The thing is that “apply” is also a verb used in English as a synonym of “to enroll or apply to a job or a position”, so in Spanish we started saying stuff like voy a aplicar a un trabajo (I’m going to apply for a job) or aplicar a la visa (to apply for a visa).

The Spanish word you’re looking for is postularse, but that might change in the near future due to how frequently this (aplicar) is used.

So, yeah, Spanglish can be a lot of fun around friends and family, and it can be interesting to discover what other combinations of Spanish and English words are out there. Just remember that using Spanglish is different from making mistakes as a Spanish learner!

So, I suggest you read my piece about 9 most common mistakes Spanish learners make, so you can identify them and correct them yourself.

Juan's a Venezuelan Teacher, Engineer, Writer and Musician based in Buenos Aires, Argentina. He's into travelling, music, videogames, films and pop culture in general. He's a member of the band Santa Fuego and lives with his wife Lía and his Shiba Inu Okami

I’m Juan Rojas. Not Rohas, not Rohas (with English r). Rojas. And today you’re also going to learn how to stop butchering 10 other Spanish last names, and pronounce them all correctly! Let’s see if you can pronounce this one: 1. Rodríguez Sí, lo sé (Yes, I know): Rolling your Spanish ‘r’ can be difficult,…

If you’re from the US, this is for you, because I’m going to teach you some Spanish chunks you can use to talk about your beloved home country, the USA. Why is that important? Well, because when somebody asks you “where are you from?”, you could say more than “Yo soy de los Estados Unidos”…

Stop saying “yo pienso” all the time! Yes, it’s correct but it’s also boring and there are much better options to say “I think” in Spanish that’ll make you sound like a native speaker. Instead, use one of these 8 great conversational alternatives!  I am Spring Spanish teacher Paulisima, and here is your first yo… 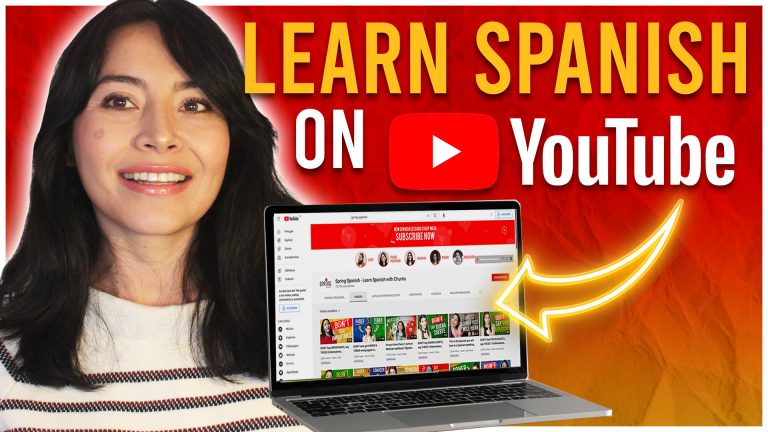 With more that 2 billion users, YouTube is an amazing platform to consume video content. Pero no todo se trata de videos chistosos de gatos y de chismes de celebridades. (But not everything is about funny cat videos and celebrity gossip.) YouTube is in fact a great tool for those who, like you, want to…

Yo digo que nos vayamos a las cinco.(I say that we leave at 5.) Yo digo que mejor a las seis. ¿Ustedes que dicen?(I say we better leave at 6. What do you all say?) Did you notice the verb that I used there? It’s the verb “decir” (to say/tell) an important Spanish verb equivalent…

In this article, you will learn algunas preposiciones temporales (a couple of temporal prepositions in Spanish) and how to use them correctly. If you are not sure about what prepositions are or how they work, estás leyendo el artículo correcto (you’re watching the right video!). I’ll teach you chunks that will allow you to fully…