Today, you’re going to finally master the verb haber and the 3 ways it’s most often used: hay, había and hubo.

Ya sé (I know), there are a lot of explanations out there on the Internet about the verb haber, but if you’ve ever thought “I understand the rules, but I never remember them in a conversation”, this piece is for you… because by the end of it, you’ll be able to always use haber correctly… without even having to think about any rules!

What’s more: you’ll even prove it to me and yourself in the big “hay, había, hubo” quiz at the end of this article!

When and how to use HAY

Let’s get started with “hay”. Here’s what we’re going to do: I’ll explain when we, native speakers, use it. Then, I’ll give you a lot of examples with hay used in chunks, in a dialogue… And then you’re going to learn these chunks by heart, so you can use them yourself in a conversation and don’t even have to think about my explanation anymore!

We’ll do the same with había and hubo. This works extremely well and will cover you in 99% of the situations.

Hay is basically the equivalent of the “there is” or “there are”, so regardless of whether the thing you are talking about is in singular or plural, you should always use hay.

Mariana 1
¿Qué hay de comer?
(What is there for lunch?)

Mariana 2
No, si quieres carne o brócoli, es lo que hay.
(No, if you want beef and broccoli, that’s what there is.)

Es lo que hay is a chunk you should learn by heart because native Spanish speakers use it all the time. The literal translation is “that’s what there is”, but what it actually means is “there’s no other option, deal with it!”

Rather than trying to translate that for word-for-word, it’s easier if you learn this by heart, as a whole, as a chunk!

By the way, if you’d like some help memorizing all the chunks from this lesson, our Inner Circle members get a flashcard deck with all the sentences, chunks and audio for all the examples in this lesson AND all our other lessons!

When and how to use HABÍA

Había is the equivalent of “there was” or “there were”, which works the same way as “hay” except that you are now speaking about the past:

Mariana 2
Sí, estuvo linda, pero había demasiada gente.
(Yes, it was nice, but there were too many people.)

Mariana 1
¿En serio? ¿Cuánta gente había?
(Really? How many people were there?)

Unlike English, where one should say there was a dog (singular) or there were many dogs (plural), in Spanish, you always use the same word, either hay, había, or hubo.

Se me hace is another chunk you should learn by heart. If translated word-for-word, it would be something like, “it makes me”, which makes no sense. What this chunk actually means is “I think”, “I’m assuming”, or “I’m guessing”. Again, learn it by heart and not only will you get it right every single time, but you will also sound like a true native speaker!

When and how to use HUBO

Hubo can also be the equivalent of “there was” or “there were”. The difference is that había is used to sort of set the scene about something that happened in the past, while hubo is used to talk about specific events in the past that have already ended.

So, for example, hubo una boda (there was a wedding), that’s an event in the past that is already over, and if I add at that wedding, había mucha gente (there were a lot of people), I’m setting the scene, describing the background for that wedding.

Here are some more examples:

Mariana 2
Íbamos a salir, pero hubo un choque, y mi novio ya no pudo venir por mí.
(We were going to, but there was a car wreck and my boyfriend couldn’t come to pick me up.)

Mariana 2
No, ni cuenta de que hubo pachanga ese día.
(No, I had no idea there was a party that day.)

Before we move on to the quiz, here’s another chunk you should learn by heart: ni cuenta de que. This is something native speakers use very frequently. The literal translation would be “no account that…”. It obviously makes no sense, so it’s better to learn it as a whole, as a chunk, and use it to say “I had no idea”.

Also, pachanga is a word Mexicans use as a synonym of fiesta (party).

Alright! So, the time has come to test your understanding of the uses of hay, había, and hubo. Fill in the blank in the following sentences and let me know how many did you get right!

Haber is a really important irregular verb. There are more irregular verbs in Spanish that you might think are difficult to remember or conjugate. But as you’ve seen today, everything gets easier if you learn it through chunks! 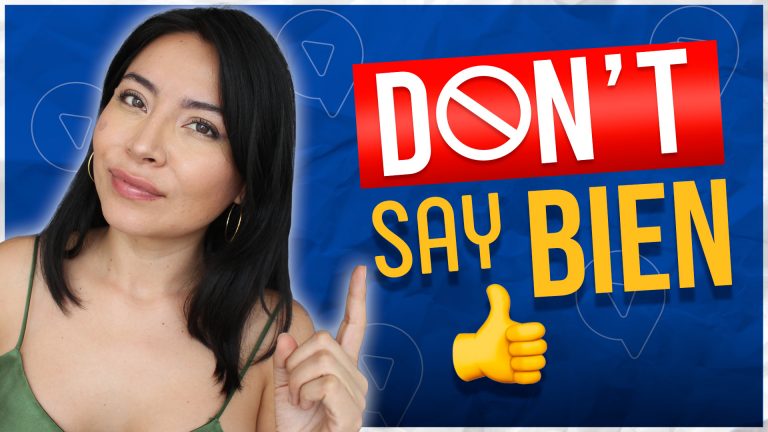 ¿Cómo estuvo el concierto?(How was the concert?) ¡Bien!(Good!) ¿Y la playa?(And the beach?) Bien, también.(Good, too.) Stop it already! Bien is such a common word that’s excessively used to answer a variety of questions in Spanish. Sin embargo, aunque decir bien no tiene nada de malo (However, even if there is nothing wrong with saying…

Let’s speak about… you! No, not “you” (point at camera); the personal pronoun “tú” in Spanish.  I am Spring Spanish teacher Paulísima and in this video you will learn how to conjugate verbs in the second-person singular… with TÚ. Nos vamos a saltar las aburridas y complicadas tablas de conjugación y en vez de eso… 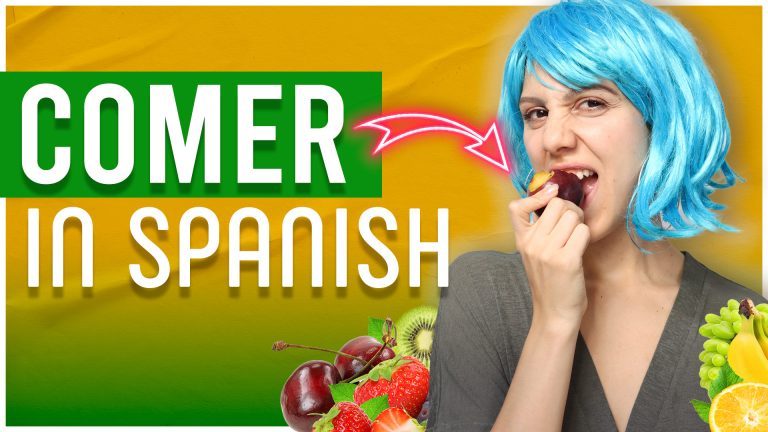 MAURA¿Comemos en casa o comemos fuera?(Do we eat at home or eat out?) CARLAComo no hicimos mercado, mejor comemos fuera.(Since we didn’t go to the market, we’d better eat out.) MAURAVale, pero vamos ya que tengo tanta hambre que me comería un elefante.(Okay, but let’s go because I’m so hungry I could eat an elephant.)…

In this article you will learn 17 of the most popular Spanish trabalenguas (tongue twisters), so you can impress your friends by sounding like a true latino/latina!   Many people from abroad find the pronunciation to be un poco difíci (a bit hard), but after reading this article, you’re going to roll those Rs and pronounce…