In this article, you will learn algunas preposiciones temporales (a couple of temporal prepositions in Spanish) and how to use them correctly. If you are not sure about what prepositions are or how they work, estás leyendo el artículo correcto (you’re watching the right video!). I’ll teach you chunks that will allow you to fully grasp which prepositions are used in Spanish, así que ¡vamos a darle!

In a nutshell, las preposiciones son palabras o frases (prepositions are words or phrases) that provide us with information about place, time, manner, or reason. In this article, we will focus on those that express time.

For example, let’s say I am to meet with a friend at a restaurant, pero se me hizo tarde (but I’m running late). My friend calls me and complains, “Quedamos de vernos a la 1” (Literally, we agreed on seeing one another at 1, but in a more idiomatic way, this means “We were supposed to meet at 1”).

The preposition in this sentence is “a“. This preposition has different meanings, but in this case it is the equivalent of “at”: “a la una” (at one).

You should bear in mind that prepositions cannot be translated literally and there’s really no point in learning them in isolation like you would with vocabulary lists. So, it’s important that you learn and understand how prepositions work in actual context. To do that, I recommend that you learn the following chunks by heart.

Chunks, as we call them at Spring Spanish, will allow you to automatically know which preposition you should use without worrying too much about grammar rules.

Let’s go over temporal prepositions, that is, prepositions that provide us with time-related information.

There are two prepositions in each of these examples: “por” in “por la mañana” and “a” in “a las 7“. Notice how “por” is used to refer to a non-specific time of day, while “a” specifies the time. The same happens in the other example: “en la mañana” (in the morning) is general, while “a las 8” is specific.

Now, you might have noticed something and might be asking: wait a minute, she just said “por la tarde” and now she’s saying “en la mañana”! Why?! The reason is that Spanish is a very diverse language. Therefore, there are countries, like Cuba, where people say “por la tarde” or “por la mañana”, while there are countries, like Mexico, where people prefer to say “en la tarde” or “en la mañana”, but they mean exactly the same thing!

Prepositions may be combined

So, as shown in these sentences, prepositions may be combined. Let's go over another set of examples.

Think of how shops, restaurants, and bars usually have a sign indicating their opening hours. In Latin America, la vida nocturna suele durar mucho (nightlife is usually very long), so don’t be surprised when finding out that most bars are open de 10 de la noche a 7 de la mañana (from 10 pm to 7 am). Woo! ¡Party loca! 🥳 Which are the prepositions in this case? “De” tells us the start time and “a” tells us the end time: “de 10 a 7“.

Now, be careful! Some prepositions are very nosy and want to take part in pretty much all conversations. So, in this phrase (de 10 de la noche a 7 de la mañana) “de” is telling us the start time, but it is also specifying the time of day: “de la noche” and “de la mañana“. If translated literally, this would be something like “10 of the night” and “7 of the morning”. It definitely sounds awkward, but you should learn the difference because Spanish speakers don't say “10 en la mañana“, as you do in English.

So, as you can see, bars in Latin America operate durante la noche (throughout the night). “Durante” is a preposition that allows us to express duration, which could also be expressed by combining the prepositions “desde” and “hasta”.

Now, “desde” may mean “since” in sentences like: “Me gusta el chocolate desde niña” (I love chocolate since I was a little girl) or “No he viajado desde 2018” (I haven't travelled since 2018).

Talking about past events

Look at these examples:

Should we take it a step further?

Tell me in the comments below which are the prepositions in this sentence.

If you've been paying attention, you already know that “de” is a preposition. But in the phrase “de Berlin“, this preposition expresses location, not time. Remember that this preposition is among those that are very nosy.

Ya sé, estás por tirar la toalla (I know! You might be thinking about giving up.) Well, don't! I have a whole video about locative prepositions, that is, those that express location. So, check it out to fully understand this topic!

Let's add another preposition, but we'll still talk about the Berlin Wall just because Berlin is my favorite city in the world:

Now, why don't you try to fill in the blanks in the following sentences?

Remember, try to write your answers in the comments below!

¡Muy bien! Now you know the most common temporal prepositions in Spanish! Ya puedes fijar horas (You may now set the time) y hablar de fechas y acontecimientos (and talk about dates and events).

The easiest way to start using prepositions correctly in conversations is to just learn the prepositions by heart with whole phrases (or chunks, like we call them), so take some time to memorize “por la tarde”, “a las 7”, “desde hace 31 años”, etc, by heart.

Now, if you want to take it a step further and get serious about learning Spanish, you should know that we have a whole series of Spanish beginner videos. So, feel free to check them all out on our channel. You may also want to have a look at our Spring Spanish Academy Courses, where we teach you Spanish with the chunks mentioned above!

Did you know that the English saying “To kill two birds with one stone” has an equivalent in Spanish? ¡Así es! (That’s right!), pero en español cambia un poco (but it changes a little in Spanish).  If translated literally, this saying would go: “Matar dos pájaros con una piedra”, but Spanish-speakers probably thought que eso… 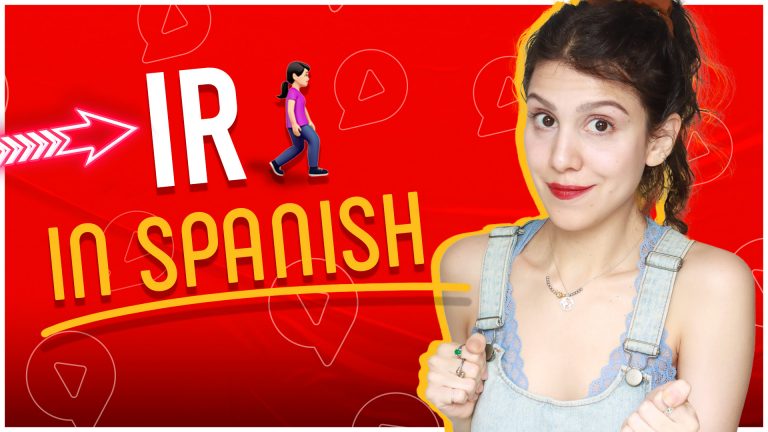 Vamos a hablar del verbo: IR. (Let’s talk about the verb: TO GO.) Why? Because it’s used all the time, it helps create an entire verbal tense, and it has a crazy irregular conjugation which makes it a bit hard to use. As always, we’ll do this through chunks! We believe it is a much…

If you’ve ever been scared by the thought of getting fluent in Spanish and all the work it takes, este video renovará tu motivación (this video will give you renewed motivation).  Because listen up: if you’re an English native speaker, en realidad te será MÁS SENCILLO aprender español (Spanish is actually EASIER to learn for…

Spanish is the second most spoken mother language, topped only by Mandarin. In addition to the 477.6 million native speakers, there are 73.7 million people who have some knowledge of Spanish, and another 21.2 million who study Spanish as a foreign language, which gives a total of 572.6 million people!!!!  Con tanta gente que habla español…

Let’s talk about Mexican political vocabulary. No, no, before you fall asleep OR get all intenso (intense) we won’t talk about political preferences! I will teach you about the most important politics in Spanish vocabulary though, and tell you a bit about how politics work here in Mexico.  This way you’ll be prepared for your…