When saying “I am”, “you are”, “she is”, and so on in English, you are conjugating the verb “to be”, because saying “I to be” or “they to be” makes no sense. The exact same thing happens in Spanish.

So, in this article you will discover everything you need to know about the Spanish verb ser, which you shouldn’t confuse with estar, another equivalent of the English verb “to be”. Yes, the verb “to be” has two translations in Spanish, but for now, let’s focus on ser, shall we?

When to use the verb ser

This verb allows us to talk about permanent or lasting traits, such as:

The key here is that we’re talking about permanent or lasting traits, in other words, they will remain the same for a long period of time.

How to conjugate the verb ser

In Spanish, verbs in the infinitive or unconjugated form end in either -ar, -er, and -ir. If a verb is regular, you just need to take out either of those endings and follow a fixed pattern. If you want to learn more about that pattern, check out my video about verb conjugations!

Bad news, though: both ser and “to be” are irregular verbs, which means two things:

The good news, though, is that there aren’t that many irregular verbs in Spanish.

Now, there’s really no point in memorizing the conjugation of this or other verbs in isolation. I suggest you learn them as chunks within a sentence. Chunks are word combinations in Spanish that are always used together, so you can learn them by heart as a whole.

This will help you use for example the verb ser in conversations without having to think about the conjugation! I’ll show you how you can learn the conjugation this way in a second.

Conjugation in the present tense

As you progress in your Spanish-learning process, you’ll notice that there are a lot of tenses in Spanish. For now, we’ll focus only on el presente (the present tense), which allows us to talk about things as they currently are.

Remember that the verb ser is used to talk about permanent or lasting traits.

If you paid attention, you might have noticed that some conjugations are repeated. Therefore, although ser is an irregular verb, you just have to learn five different conjugations:

So how can you learn those as “chunks”, like I mentioned before?

One of the easiest ways is by memorizing flashcards with full Spanish sentences, where you have to fill in the correct conjugation!

Do you remember the answer? Here it is:

You can create flashcards like this for all the conjugations (and with the example sentences used above or the ones that I’ll give you in the rest of this article). After a while, it’ll become second nature for you to say “yo soy, tú eres, etc!”.

You will also use ser when talking about your occupation or that of others.

Speaking of gender, the verb ser allows us to indicate whether someone is a woman or a man.

If you’re describing someone’s character, skills or appearance, you also use the verb “ser”. Like for example:

We actually have a whole video with Spring Spanish teacher Maria Fernanda about describing people where you’ll learn tons of useful chunks, so why don’t you go check that one out?

¡Muy bien! You are more than ready to use the verb ser correctly. ¡Eso es genial! (That’s great!) It’s definitely not everything there is to learn about Spanish, though, so if you want to master this beautiful language, not only should you go ahead and watch all the videos on our channel, but you should also sign up to the Free Spanish Training on our website.

By doing so, not only will you get free sample lessons, but you will also discover the method we use at our Spring Spanish Academy to teach students to speak fluent Spanish.

Hola, me gustaría el filete de pollo a la plancha y una copa de vino tinto. Gracias. (Hi, I would like the grilled chicken fillet and a glass of red wine. Thank you.) Congratulations! You just ordered food in a restaurant… like a true textbook! Don’t worry, everybody understood you.  But wouldn’t it be nicer…

Today’s article is all about the PLURAL in Spanish! Basically, there are 4 rules to create the plural version of a word… which I, Cory, your favorite Spring Spanish teacher, will give you today.  Pero (But)… if you want to always get the plural right in a conversation, while speaking, ¡NO quiero que las aprendas…

If you’ve been struggling with the proper use of the subjuntivo, ¡no te preocupes! (don’t worry)! This video is for you. Quizás nunca hayas escuchado la palabra subjuntivo (Perhaps you have never heard the word subjunctive before), y es posible que el subjuntivo sea (probably, the subjunctive is) one of the hardest things in Spanish…

If you want to sound like a native Spanish speaker, please don’t just say “¡yo quiero!” (I want!) Yeah, it does the job, but if you really want to blend in and speak Spanish at a high level, better use the following 5 alternatives instead!  I’m Spring Spanish teacher Paulisima, and THIS is your first… 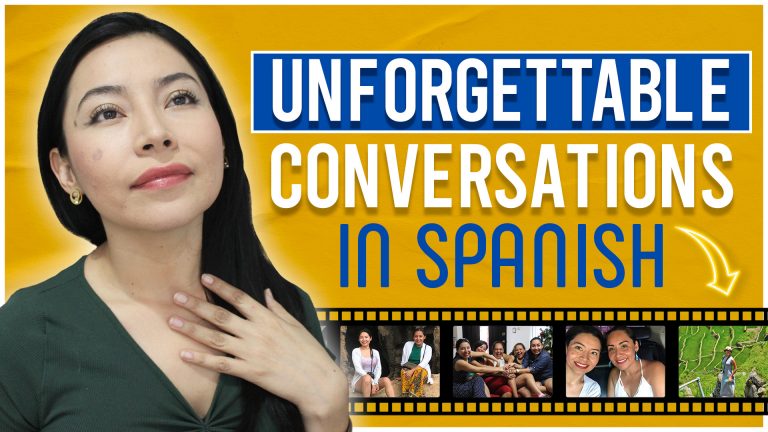 Let’s talk! ¡En español, por supuesto! (In Spanish, of course!) I’m Spring Spanish teacher Paulisima, and in this video, I will show you 5 questions and answers you can use to have a conversation in Spanish that will make you memorable to your conversation partner. Empecemos. (Let’s get started.) 1. ¿Con quién de tu familia…

Mis amigos, if you want to sound more like a native speaker while speaking Spanish, it’s time for you to STOP saying the same old vale or okay in Spanish. Use one of these 10 much more conversational alternatives instead!  I’m teacher María Fernanda from Spring Spanish, and THIS is your first alternative:  Before I…